This time five years ago, Florida voters overwhelmingly approved the Water and Land Conservation Amendment (“Amendment 1”) and effectively added it to the state constitution. Getting Amendment 1 on the ballot and approved by voters was no easy feat, but victory was sweet. With about 75% approval across the state, Florida voters sent a message to our lawmakers: we want dedicated funds to protect Florida’s water, wildlife habitat, natural areas, and parks, now and for future generations.

The sponsor committee behind Amendment 1 was a coalition of environmental advocacy groups known as Florida’s Water and Land Legacy. FWLL formed as a direct response to the severe budget cuts made to popular and effective state conservation programs since 2009, namely Florida Forever. With a straightforward allocation of 33% of documentary stamp taxes directed to the Land Acquisition Trust Fund, the self-implementing constitutional mandate was intended to restore funding to existing programs like Florida Forever and Everglades restoration.

While protecting Florida’s land and water was the #1 goal of the ballot initiative, the campaign was a testament to the power of democracy. With thousands of supporters statewide, volunteers succeeded in collecting 250,000 petitions, roughly one-third of those needed to make it to the ballot. Vote totals in 50 of Florida’s 67 counties exceeded the 60% threshold required for passage, and 32 counties passed Amendment 1 with more than 70 percent support.

Since the passage of Amendment 1, the FWLL coalition has transformed into who we are today: Florida Conservation Voters. We are still fighting to advocate for conserved land, clean water, climate and energy action, and healthy, just communities.

Where do we go from here? The passage of Amendment 1 was a monumental success, but our work isn’t done. We must continue to hold our lawmakers accountable. The Florida Legislature must finish the job:

On Nov. 4, we gathered key conservation partners at the Capitol for a celebratory press conference. We were joined by 1000 Friends of Florida, Conservation Foundation of the Gulf Coast, Conservation Florida, The Trust for Public Land, and Tall Timbers Research Station and Land Conservancy. 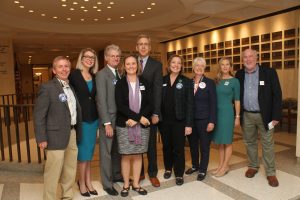 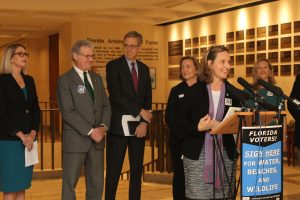