On Wednesday, Oct. 30, I attended the Southwest-Central Florida Connector Toll Road Task Force meeting in Lakeland. Similar to the first meeting, there was frustration from task force members about the lack of relevant data and analyses provided to them – information that is absolutely critical to making viable recommendations.

I gave the below comments during the 4:30 p.m. public comment period. As we approach Halloween and Día de los Muertos, I wanted to remind the Task Force members what scary effects are in store if we build this dreaded road to ruin. 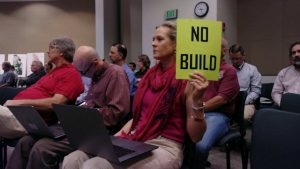 Good afternoon. I’m Lindsay Cross with Florida Conservation Voters. Of course, we all know that tomorrow is Halloween. It also begins a three-day celebration in Mexican culture called Día de los Muertos or Day of the Dead. It’s a time to honor and celebrate loved ones that have passed. Unfortunately, that resonates today as we consider the construction of 140 miles of new, unneeded toll roads through some of our best remaining natural and agricultural areas. The Southwest-Central Florida Connector will only lead to the death and destruction of our state, especially our wildlife and water supply.

In that sense, today is not a day for celebration, but an ominous day that precludes this destruction, unless you, the Task Force and Florida Department of Transportation, recommend the only viable option which is the “no build” option.

The Southwest-Central Florida Connector is nothing more than the Heartland Parkway, attempting to be resurrected from the dead. This is the road that will not die. Already it has been rejected by local communities because of its potential impact on critical habitat and its morbid economics.

Rather than learn from history, this zombie road has returned to destroy living resources and the vitality of our state in its thinly-veiled renaming as the Southwest-Central Connector.

Well-respected Florida biologist Dr. Reed Noss has written that Florida has the most ancient plants in North America and we are behind only California and Hawaii in terms of the number of endemic plants – those that are found only in this state. Many of these endemic species and the habitat areas they occupy are within the counties that will be impacted by these roads.

This biodiversity is special and our remaining natural and agricultural areas need to be treated as such. We hold many things sacred in our state and nation, yet we have done little to protect our biodiversity.

The Florida panther, our state animal, has made remarkable strides in its recovery, with females and kittens being documented north of the Caloosahatchee in 2017 – the first time since 1973. This is an underdog (or cat, if you will) success story that can only continue with greater protection – not destruction – of its habitat. Despite the claims that these roads will be good for the environment and wildlife, if constructed, we will mourn the loss of the Florida panther and many other species.

No build is the only option if we truly care about the biological integrity of our state, our water supply, and the rural character of many small towns. It is also the most economically-conservative thing to do and fiscally-responsible lawmakers, regardless of party affiliation, should recognize this as a horrible use of our taxpayer dollars. Instead, let us improve and expand existing roads, like State Roads 17 and 27. Expanding water, sewer, and broadband, as well as investments in rural areas, are worthy goals of the Legislature. They can and should be accomplished without constructing new roads through the places that sustain our state’s economy, freshwater needs, and the agricultural sector.

Let’s not trick ourselves into thinking that the M-CORES toll roads are good for our state. I implore you to recommend a “No Build” option and protect the treasures we have in South Florida.