“Florida deserves a legislature that is responsive to the environmental needs of our growing state,” said Aliki Moncrief, Executive Director. “Floridians have shown they value conservation and environmental preservation time and again at the ballot box. We look forward to working with our legislators to protect our water supply, fund parks and recreation lands, and move our state toward a renewable energy future.” 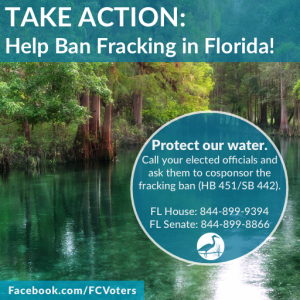 Fracking originated as a term to describe hydraulic or acid fracturing. It involves injecting millions of gallons of highly-pressurized water, usually mixed with sand and chemicals, deep into the earth to crack the rock and release oil or gas deposits. Another method – known as “matrix acidizing” – involves injecting acidic chemicals into underground rock formations, but at lower pressure, with the chemicals dissolving the rock (not fracturing it) to release oil and gas. All fracking techniques use a toxic chemical combination and produce large volumes of wastewater.

Spills and leaks resulting from the transport, storage, and injection of hazardous chemicals pose a serious threat of contaminating our drinking water and water resources. Nearly 75 percent of chemicals used in fracking have been proven harmful to the skin, eyes, respiratory system, and digestive system. Nearly half of these chemicals also affect immune, cardiovascular, and brain/nervous system functions, and a quarter cause cancer and congenital disabilities. In Florida, the risks that fracking and fracking-related activities pose to our state’s water supplies are too great.

SB 442 has been referred to the Senate Environmental Preservation and Conservation Committee, chaired by Sen. Lauren Book (D-Plantation), where it will receive its first hearing on Tuesday, March 7, the first day of session. HB 451 has been referred to the House Natural Resources & Public Lands Subcommittee, chaired by Rep. Holly Raschein (R-Key Largo). 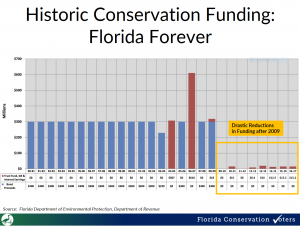 Florida Forever is the state’s premier conservation, water supply protection, and recreation lands acquisition program. It has become a blueprint for conserving natural resources to strike a sensible balance between protecting our state’s natural resources and fueling future economic prosperity.

Florida voters overwhelmingly approved the Water and Land Conservation Amendment in 2014 to restore funding to the Florida Forever program and its local parks counterpart, Florida Communities Trust. FCV will be working with legislators to properly implement the intent of the Water and Land Conservation Amendment (Art. 10, Sec. 28) and statutorily dedicate at least one-quarter of the Land Acquisition Trust Funds to the Florida Forever and Florida Communities Trust programs.

Florida should be at the forefront of shaping a clean energy future, yet for too long, we’ve been held back by the utilities that profit more from continuing our dependence on fossil fuels. Meanwhile, public support for solar has never been stronger, as evidenced by high-profile election wins for solar in two statewide constitutional campaigns in 2016. FCV will be working with legislators to pass SB 90.This clean, bipartisan bill to implement Amendment 4 will make it more cost-effective for Florida businesses to go solar by eliminating tax burdens on solar infrastructure.

SB 90 was referred to four committees and has already unanimously passed through its first two. It is now in the Senate Appropriations Subcommittee on Finance and Tax.

There is not yet a House counterpart.

Now more than ever, we must make our voices heard this election on November 8th! …